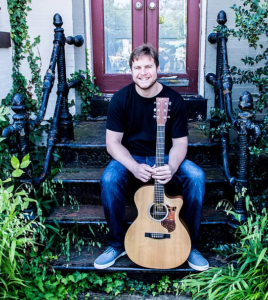 Growing up, music was always a prominent part of Chris Cassaday’s life. Whether it be singing in the back seat of his mom’s car, or watching his dad play the drums, Chris was hooked on music at an early age. And after receiving his first guitar at age 14, Chris honed his songwriting skills over the next few years, playing in various bands and as a solo act throughout high school and college.
After graduating from JMU in 2014, Chris independently released his first professionally recorded solo album The Savannah Sessions on May 25th, 2015. Chris got to work with producer/engineer Ted Bowne Of Passafire, one of Chris’s greatest influences and favorite musicians. Chris’s original song My Oh My off of the album was sought out by Sirius XM radio and is now being played regularly on Sirius XM’s the Coffee House (Ch. 14). Chris also performed a live session for Sirius XM in September 2015 that was featured on the air. After two years of extensive live performances around the country, Chris released his next studio effort Stranger Places on April 10th, 2017.
Chris has performed live for countless audiences both solo and with his band “The Cassaday Concoction” all over the country and even abroad and has proven quickly that he is a must-see live act. Chris’s unique blend of blues, rock, folk and funk, and his thunderous, distinctive voice have started to gather him a significant following. The sky is the limit for this Washington, DC based singer-songwriter.